The ‘N Word’ — source of pride, or prejudice?

Widely known as the ugliest word in the English language, the “n word” has become something totally different in the past 20 years or so. Mostly, a term of affection used frequently by African Americans, the word has become synonymous with friendship, like a badge of honor. Once a word used to denigrate and destroy, it is now used to comfort and assimilate. Astonishingly enough, it is used on an everyday basis by most minorities. The “n word” rolls off the tongue just as easy as one’s name. Although all minorities use the word, African Americans were and still are the main group affected by it.

White slave owners and overseers used it religiously against African Americans to diminish the value they had on this earth. They were regarded only as property, not even as human beings. The ‘Willie Lynch Letter,’ written by a slave owner said to have delivered the same words in a speech on the bank of the James River in the colony of Virginia in 1712, details a lengthy “foolproof” method of controlling slaves.

The Lynch letter it states, “You know language is a peculiar institution. It leads to the heart of a people. The more a foreigner knows about the language of another country the more he is able to move through all levels of that society.”

Slaves were not allowed to learn languages of other countries. Therefore, blacks were not as educated as whites. The only form of language they knew was spoken to them on a regular basis.

The “n word” was used around the clock, drilled into the minds of blacks and ingrained into their psyche. Pretty soon, slaves started calling each other “nigger”.

As a people, African Americans are very proud. When faced with adversity, they ban together to try to change the circumstances of their surroundings evident by the Civil Rights Movement led by leaders such as Martin Luther King Jr. and Malcolm X.

Attempting to change a positive into a negative is noble and shows strength but that isn’t the case in regards to the “n word”. Trying to make the word a positive shows mental weakness and self-denigration.

The Willie Lynch Letter also states, “Both horse and niggers [are] no good to the economy in the wild or natural state. Both must be BROKEN and TIED together for orderly production.” 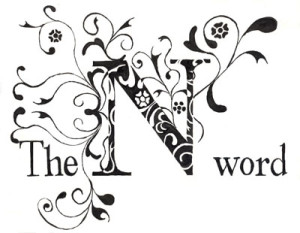 Slaves were broken by splitting the black family apart. They pinned mothers against fathers, children against parents and darker skinned against the fairer skinned. Two ways this was accomplished were by physical beating or whipping, and propaganda.

Whipping caused extreme physical damage on the bodies of African American ancestors but what was said to them hurt the most. Stripes and wounds would eventually heal but harsh words and false ideals which shaped their mentality became permanent. This, in fact, is why the “n wor” is used today.

Now, in the year 2015, that word has evolved into a double meaning. The hard “er” at the end is meant to be offensive but add an “a” at the end and it receives a stamp of approval.

Just as crack cocaine destroyed American communities back in the 80’s, the “n-word” has been a destructive cancer for centuries.

Crack cocaine comes in many forms; a solid or powder. You can smoke or snort it, either way the same result exists. You can break the “n-word” down into any spelling, pronunciation and meaning but its end result will still be the same. Both outcomes are negative, an extreme high and false sense of euphoria which will eventually leave one crashing down and inevitably destroyed.

“Using the n word as a term of endearment is like putting lipstick on a pig. You can dress it up and make it look nice but its still a pig,” said Ubas Achilike, an African male native to Nigeria and current resident of Bloomfield, New Jersey.

How can something so vile, so deliberately evil be turned into something seemingly positive?

Students at American International College chimed in on the topic in response to the differences between the traditional use and current use of the n word.

“Its just another word. Nigga is just another term to call somebody, its totally different from nigger. Its just a swear or any other word. I don’t take it seriously,” said Jerrod Shelby, an African American student at AIC.

“I use the word just because. My dad uses it, he’s black. My mom doesn’t, she’s white. I think the baby boomers still hold on to the word because it was used so much in their time. It was used against old blacks so they hate the word and old whites used it so they don’t care. Us millennials don’t care either because it’s a part of our society now,” said Holmes.

Javon Williams, also an African American at AIC, explained his reasoning in using the word in regards to the differences.

“I feel like its a brotherhood but if you put the “er” at the end then we might end up fighting. Nigger and nigga are two different words. It’s important to know the background of the word. If you’re going to use the word you should know what it means. Honestly, I think rap music made me use the word,” Williams said.

Since the word is used frequently in rap music, it’s become acceptable to all races due to the push through mainstream media. Words are powerful, which is why music is very influential. Things that are spoken into the atmosphere and into existence can never be taken back.

Songs like YG’s “My Nigga,” which was a top 20 smash single on the Billboard 100 last year, are promoted through the airways and are played in rotation over and over again. Eventually, the message of the song is going to stick.

Contrary to the popular YG tune, fellow rapper Big Krit’s song “Another N.I.G.G.E.R” gives a unique twist on the word. Big Krit, which is short for King Remembered In Time, is no stranger to acronyms evident by his stage alias. He takes the “n word” and gives each letter its own importance. When it all comes together, the acronym becomes “Naive Individual Glorifying Greed & Encouraging Racism.”

The problem is most of the youth today don’t know the background of the word. There is no sense of history from African American youth, therefore, they are insensitive to the damage the word has caused and is still causing.

By not being properly educated on the history of the word and acknowledging its destructive power, we are, in fact, raising a generation of “N.I.G.G.E.Rs.”

The NFL is now proposing to implement a rule that would penalize a team 15 yards if the word is uttered during play. The majority of the NFL is African American so we can assume that the rule is targeting these individuals.

AIC assistant football coach Kristofer Kulzer, a Caucasian male, has some issues with the word and the proposed rule.

“Do I used the word? Absolutely not. Never. I don’t even think it’s my place to talk about this,” Kulzer said.

“With the NFL trying to ban it, they should ban all offensive language, not just that one word. If you just ban that then you’re just restricting African Americans. But, once you use the word it’s all means the same thing. There is no difference. It’s tough for me to say though because I’m white. I don’t use the word and I was taught not to say it.”

If this rule is implemented and its premise is successful, then most likely it will travel to the other major sports where African Americans are dominant. Basketball will be the next target.

Rory Sparrow, a former 12-year NBA veteran and current player program manager, also gave his opinion on the the “n word,” NFL and some background in his time in the NBA.

“It’s an interesting word,” Sparrow said. “Context has a lot to do with the interpretation of the word. It’s a word to denigrate and put down. I’m not sure it should be a finable offense. We as African Americans should fight against the word. Now, players in the NBA use it every other word to try to express their feelings. When I was playing I’ve only heard it from fans, not players. But, that was the early 80’s, it was a different era. There was a sense of awakening and black power at this time. You guys (the youth) have to be a little more aware of your history.”

If we take a look at the history of the word, we can see that it applies to any and every race of people.

Nigger- noun: a victim of prejudice similar to that suffered by blacks; a person who is economically, politically, or socially disenfranchised. A person of any race or origin regarded as contemptible, inferior, ignorant, etc.

The n word” derived from the Middle French negre, Spanish or Portuguese negro and the Latin niger which all mean dark or black. While most believe this word was used only against people of darker pigmentation, it was also used against other races who were seen as inferior. For example, the Irish were known as the “niggers” of Europe.

White people are afraid to talk about this issue because they aren’t “allowed” to say the word. Blacks feel entitled to the word so they feel that they are the only ones suitable to use it. The rest of minorities are just left in society to wonder.   No one should be entitled to destruction.

In the Oscar winning film “12 Years a Slave,” Platt, a kidnapped freeman turned slave played by Chiwetel Ejiofor, was called an “exceptional nigger.” It was said as if a black man was incapable of being anything but the beasts they viewed them to be. The fact that he was able to articulate himself and use critical thinking skills was foreign to the whites that enslaved him.

The point is, blacks were capable of doing anything whites were. The only problem was they were not seen as counterparts or allies but as simple “niggers”. No matter what race, we are all exceptional people. We should be intelligent enough to realize that past wrongdoings should be left in the past and not repeated in the present.