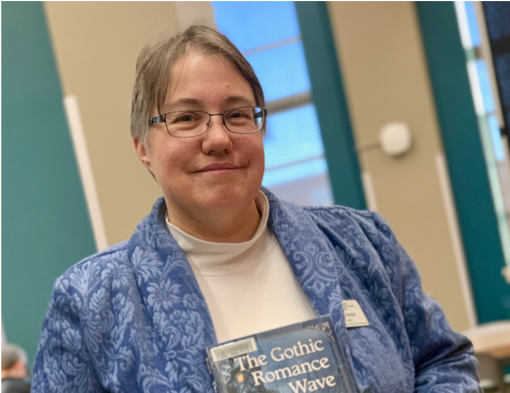 What do you know about gothic romance novels?

Most are probably familiar with romance novels in general, characterized by their sensuality, mystery, and passion. One famous example of a modernized gothic romance novel is the Twilightseries. Another is 50 Shades of Grey. We all remember the craze. What many don’t know is that novels like these were inspired by female authors of the 18th century.

Despite the reputation of being overly dramatized and fervent, gothic romance novels are exquisite pieces of literature with just as much substance, if not more, as other popular genres like mystery, drama, and science fiction.

With the holiday season in action, and this wintry weather outside, reading fanatics can snuggle up for an enjoyable reading of author and English professor Dr. Lori Paige’s new book, The Gothic Romance Wave: A Critical History of the Mass Market Novels, 1960-1993.

Originally titling the work Suburban Castles, Paige was inspired to write the book since grad school, when it was first popular to study romance novels in a scholarly and academic way.

“They’ve always been the most popular type of books published, they sell millions and millions, and yet, everybody makes fun of them,” said Paige, who is chair of the English Department. “I’ve always been kind of interested in that tension between huge sales, which means people love them, and the tendency of people, particularly academics, that kind of make fun of them and say they’re not real books.”

Paige has a special interest in gothic romance books, which were popular around the late 1960s and early 1970s. She explained that the gothic aspect usually involves a young women or governess that arrives at a spooky house and must solve some sort of problem. They’re a good mix of romance, horror, and mystery.

The most famous examples of early gothic novels came from the Bronte sisters, who gave us classics like Jane Eyreand Wuthering Heights. These books quickly became popular and set the tone for gothic romance books in the future. In her new book, Paige references a romance book by Ann Radcliffe, titled The Mysteries of Udolpho. Radcliffe’s book was one of the most popular books in England in the late 18th century.

“Nobody reads it anymore, but everyone knows what it is because Jane Austen made fun of it in her parody of the book, Northanger Abbey,” said Paige. “The reasons for this popularity is one of the things I explore in the book.”

She writes, “Female readers, it should be remembered, supported the steady production of gothics with the money they earned in their own modern careers, and they demanded stories centered on the heroine’s perspective.”

Paige has also written gothic romance novels of her own. Julius: Heart of Iron: A Victorian Vampire Romance, is one of Paige’s books that can be found for free on Amazon. It is a story of a young woman who is to be married to a terrible man, and the man she’d rather marry, she finds out, is a vampire.

She also recommends the book Mistress of Mellyn: The Classic Novel of Romantic Suspense, written by Victoria Holt, which can be found for a low price on Amazon. This is a story of a woman who becomes a governess for a mysterious man with a spoiled daughter.

The impact that gothic romance novels have on society can be unpredictable, however, it is forever evolving with its diverse audience. Readers of all ages can expand their viewpoints and become inspired. Paige’s lively style of writing is sure to keep the reader intrigued and begging for more.