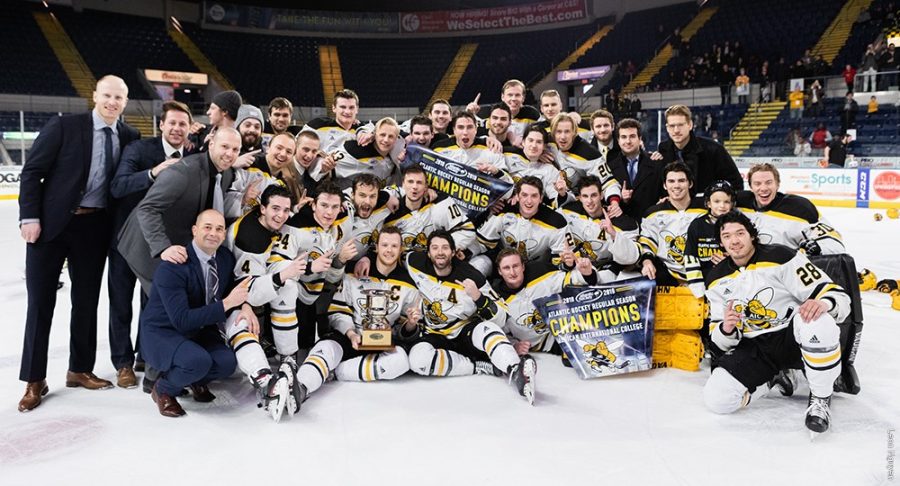 AIC Hockey celebrates as they made history over the weekend — the Division I team won their first-ever Atlantic regular season Hockey Championship on Saturday, March 2, 2019.

The Yellow Jackets faced off with the Sacred Heart Pioneers, defeating the Pioneers 4-1 on a historic day at the MassMutual Center.

Naturally, the AIC family was ecstatic, praising the team that started out the game as the underdog and managed, with skill and solid teamwork, to pull off a victory.

Sacred Heart’s Todd Goehring opened the scoring 2:53 into the game. But that 1-0 Sacred Heart lead didn’t last all too long.

AIC struck back and knotted the score at 1-1 with forward Luka Maver’s goal at the 19:05 mark of the frame, assisted by Martin Mellberg and Blake Christensen.

During another power play, Tobias Fladeby, a native of Asker, Norway, who finished with a total of 17 goals this season, scored in the second period at 9:06. Christensen and defenseman Janis Jaks, assisted.

The third period brought a little extra pressure, but the Yellow Jackets held onto their lead and then some; Justin Cole found the back of the net and Fladeby assisted at 9:00 in the third, followed by an unassisted power play goal with a minute and a half remaining on the clock, giving the Jackets a 4-1 lead as the clock ticked toward 0:00.

Austin Albrecht, an AIC junior who plays left wing on the team, said members played hard and played as a solid team.

“This was a massive win for the program,” said Albrecht, who majors in Communication.

“This school has never won an Atlantic hockey regular season championship,” he noted. “We won 4-1 with an empty net goal. We broke so many records this season but winning the division regular season was the first step. Two more trophies to win! An Atlantic title and then possibly the national championship.

The team members and coaches weren’t the only ones who were ecstatic over their win.

AIC senior Annie Norton attended the game at the MassMutual Center, and agreed it was an exciting moment.

“The atmosphere at the game was great,” said Leclerc, who majors in Visual & Digital Arts.

“There was a good crowd there and I think it was good that people got to see a great game of hockey and AIC make history. There are a lot of talented people on the team, so it was great to see them succeed and achieve a goal that they had been working towards.”

Coach Eric Lang commended the team and all their hard work.

“Anytime you can accomplish something for the first time in school history and have a historical impact on the program It’s an accomplishment that we are all extremely proud of,” he said.

Lang highlighted the team’s compatibility and the respect they have for one another.

“We have outstanding leadership and our team culture is something we believe is the difference between winning and losing,” he said. “The best part of our team is they love being Yellow Jackets. They are an amazing group of human beings and represent the institution with class. Hopefully we can lean on these pressure packed games in our conference tourney and win more 4 games and be one of 16 teams in the NCAA tournament.”

The Yellow Jackets are waiting on the results of the First Round of the Atlantic Hockey Championship Tournament.

Depending on who emerges winners between now and then, the team could be playing Robert Morris, Holy Cross, Army West Point or Canisius.

The Yellow Jackets now move onto the Quarterfinal series with a March 15 game at the MassMutual Center. Game 2 is March 16 and, if necessary, a decisive Game 3 would be held on Sunday March 17. All games begin at 7:05 p.m.

AIC holds the top seed and will face off against the team who rank the lowest, which is also undetermined at this time.

Editor’s note: The Yellow Jacket would like to wish the team luck throughout the rest of the tournament. Also, we send EXTRA luck to our two staff writers and team members, Austin Albrecht and Stefano Durante.