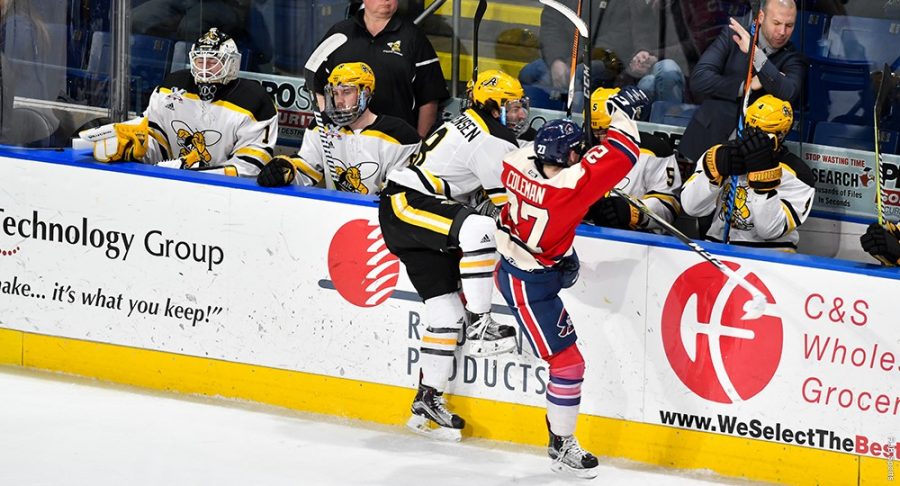 A weekend in earl April finished Yellow Jacket hockey for the 2018 season – but what a year it was for the men on the ice.

From top to bottom of the roster, the Yellow Jackets amazed all fans.

At the beginning of the season the Yellow Jackets were picked to finish 5thin the pre season polls by Atlantic Hockey. The team ended the season coming in first in their division for the regular season.

After decades of losing and not having a winning season, the Yellow Jackets have a lot to be proud of and they are hopeful for the years ahead.

Two seasons ago the Yellow Jackets had a record of 8-20-8 and this season they finished the season with a record of 18-15-1. Although the team did drop every out of conference game this season, they were right there in every game and every single game was a top ten team.

If the team had a little more success out of conference, they would have had a bid in the NCAA tournament. As the team gains more success, they will also have a big target on their back for heading into next season. The roster of American International College is made up of 11 Europeans.

The Americans might be a little outnumbered by guys that are not from the United States but Head Coach Eric Lang had a vision of what he was going to do with this program and he had been very good with recruiting and finding pieces that fit every spot regardless of where they are from.

The following weekend the team traveled to North Dakota to take on the number one seed in the tournament that happened to be the St Cloud state Huskies.

They lost a total of three games all year and the odds were stacked against the Yellow Jackets due to the team being a number sixteen seed. The boys in the locker room never doubted each other and ended up winning the game 2-1.

Goals scored by Brennan Kapcheck and Joel Kocur propelled the Yellow Jackets over the Huskies which some were saying the biggest upset in college hockey history.

Team member Joel Kocur stated, “To us it wasn’t an upset, it was just another win for us.”

This historic win made national news and will go down as one of the biggest wins in team history.

Going into next year there’s a lot of hype surrounding the team that will most likely be ranked going in to next season.

Forward Kyle Stephan said, “This team will only get better over time and I can’t wait for next season. We’re not just going into games hoping to win, were going in expecting to win.”

After going to the elite eight this year the Yellow Jackets will be aiming at a national championship next season.