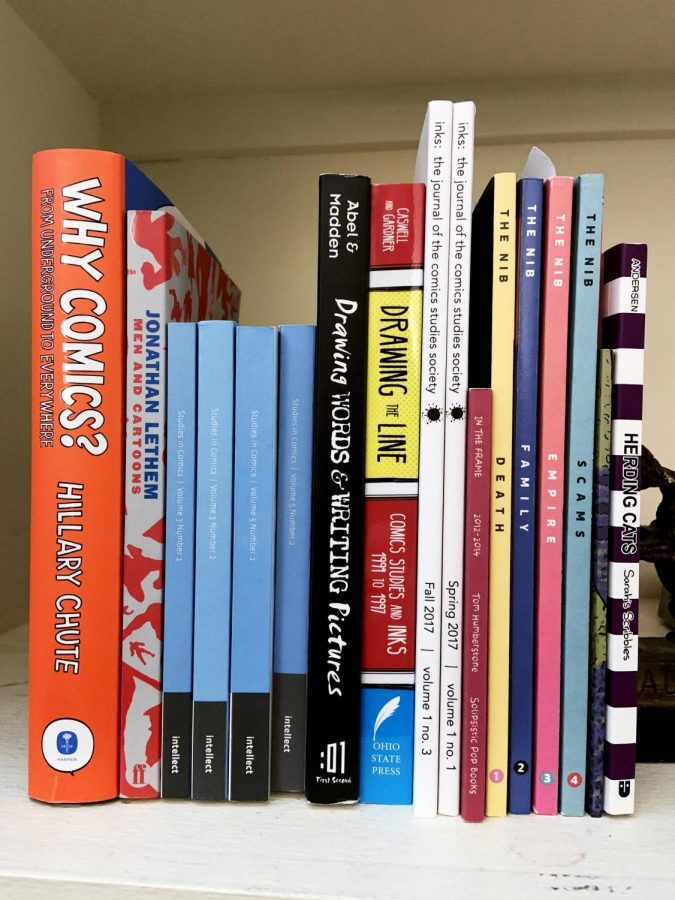 Bishop Bryan, Staff Writer
Comic books have waxed and waned in popularity since the early 1930s, reaching a peak in the 1990s.  The medium has made a resurgence in the 2010s after a dip at the turn of the millennium. Even though many still consider comics to be simply stories for children about people in costumes fighting villains, they can offer interesting and dynamic social commentary.
Kat Lombard-Cook is a new professor of communication at American International College. “I started off as someone who really loved comics and read them a lot,” professor Lombard-Cook said. When she attended graduate school in Scotland, she took an elective about comics. “I ended up deciding that I was interested in the structure of comics,” she said, “and we tell stories in comics differently.”
Her dissertation was titled Interrogating and Analyzing Narrative Structure Through Comic Books. She described her project as “a series of five individual books, each of which is a chapter of my thesis. Each examines comics through a different lens: some through memory, some through autobiography, [some through] postmodernism.” It dives deep into how comics are structured and the unique stories that can be told through them, placing subconscious influence within them.
With this in mind, it is clear comics can speak to deep issues like social justice and other serious topics.
One of the tropes most often found in the history of comics is referred to as the “women in refrigerators” trope. This references a Green Lantern comic where the titular character finds his girlfriend murdered and shoved into a refrigerator. This violent act is done simply to move the story along, treating her as an object rather than as a person. “Their whole purpose [of women in these comics] is to be rescued or killed in a way that is horribly violent,” Lombard-Cook said, “or violated so that the male character, who’s coming to save them, can rescue the woman rather than having women have agency.”
Because of the criticism comic creators faced due to their mistreatment of female characters, they tried to move in a direction of empowerment, creating stronger female characters. “I think, in a way, it’s interesting to see the ‘strong female character’ trope,” Lombard-Cook commented. “And then realizing a lot of what those women were put through wasn’t actually any better, and was basically torturing female characters.”
This wave of strong female characters boiled down to women who had been put through unnecessary tragedy and suffering. But this time, instead of existing only to be killed off, they were more central characters. For example, characters like Barbara Gordon (Bat Girl) emerged, who is thrown off of a building and who becomes permanently disabled.
There are other issues in comics, beyond the content. It can be hard for comics fans to square their relationship between the content and the creator. Lombard-Cook talked about her own relationship with work that is important to her but is created by an author who later was found to have engaged in harassment.
“When people try to look at this stuff critically… There is a cult of personality around these creators.” It’s hard to balance the critiques of the work against the creator. In comics, the creator is so heavily embedded into them that it is difficult to separate the artist from the art they have created. The work is inextricably tied to the creator.
Lombard-Cook deeply connected with the work of Brian Wood in her early twenties. In 2013, Wood was subjected to scrutiny in the wake of allegations coming to light about his personal life. Wood, who has worked for both Marvel and DC, is a comic creator who was exposed for leveraging his industry status for sexual favors from young women who were trying to break into the comics industry. He has apologized publicly for his actions.
Lombard-Cook is hopeful about the shifting culture in the comics industry. “It seems like it’s always a one-step-forward-two-steps-back kind of thing, but I think we have progressed, especially the indie movement.” The indie comic scene helps creators make comics completely independently of a large publishing house. Often these creators are supported by Patreon, a crowdsourcing website for creators, and this has given opportunities for minority creators to have a voice without being curtailed.

Still, comics remain an extremely popular media in today’s culture. Watchmen, a comic written by Alan More and David Gibbons, has made it onto the Times top 100 best novels list. Watchmen examines the tropes of comics and of American society in general. People found it to be an oddity because it is, in fact, a comic or graphic novel, but Lombard-Cook rejected the term “graphic novel.” 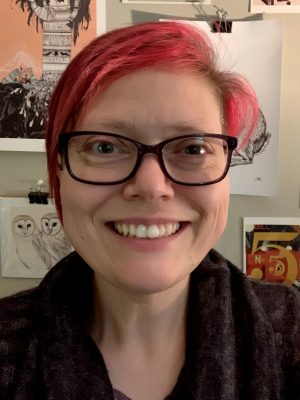 “I talk about comics,” she said. “I don’t talk about graphic novels or comic strips. I like to use a more inclusive term.” People try to make this distinction and it implies that comics are not an art form sophisticated enough to be considered alongside literature, but this hierarchical thinking is damaging to the medium in general.
Comics have seen a resurgence in popular culture thanks to the Marvel Cinematic Universe, but the question must be asked whether it is positive or negative for comics in general.“It’s interesting to see the shift in the MCU over the course of ten years,” Lombard-Cook said. “You started with the core of superheroes, very safe, your powerful white guys. But now you have the success of Black Panther and Ms. Marvel.”
With these more diverse characters gaining recognition and success, they continue to disseminate the stories to new audiences and strive to represent everyone. Hopefully this will lead to more and more people embracing a love of comics.
Delete Image
Align Left
Align Center
Align Right
Align Left
Align Center
Delete Heading