AIC hockey sets record with highest-scoring win of the season 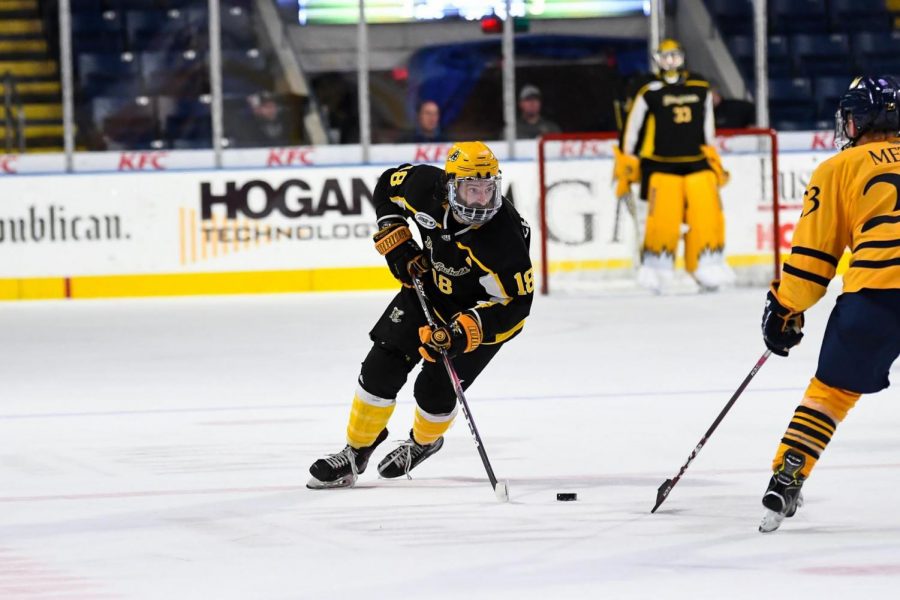 Over the weekend of November 15-17, 2019, the Yellow Jacket men’s ice hockey team set a school record. The Yellow Jackets traveled to Erie, Pennsylvania to take on the Mercyhurst Lakers in a two-game home stand. Though the Yellow Jackets lost 4-3 on Saturday, they defeated the Lakers 12-0 on Friday in the highest-scoring game of the season so far.

The seven-hour bus ride seemed more like twelve after leaving Springfield at 8am and not arriving to Erie until about 5pm. Long bus rides like this normally affect teams in a negative way because they might have “bus legs” for the game.

But not for the Yellow Jackets. The following day, AIC went on to beat the Lakers 12-0. This was the highest scoring game all season by one team in college hockey this season. The Jackets had trouble scoring the first few weeks of the season, but it all came together for the Jackets this past Friday, November 15.

After the first period, the score was 5-0. Everyone in the locker room was not satisfied or content at that point. The Yellow Jackets have been in that spot before and have gone on to lose games after being ahead by 5.

AIC went into the second period focused on scoring more and did not let their proverbial foot off the gas at all. By the end of the second period, the Jackets were up 9-0. At this point everyone was looking around like, what is going on?

No one was celebrating after the fourth goal, and there was no need to rub the score in the opponent’s faces, especially when there was a second game to be played the next day. The game ended up being 12-0, a record for AIC hockey.

For Jared Fiske, who is from Erie, the win was particularly satisfying. Fiske commented on the team’s historic win. “You know it’s always nice to get a win,” Fiske said. 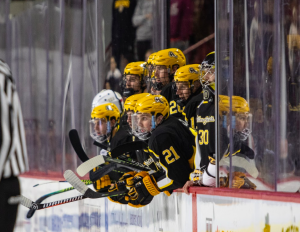 “Especially when it’s like that. Those kinds of wins don’t come around a lot. But being from Erie, and knowing that Mercyhurst passed on me, and never offered me [a spot], it was really nice to beat them by that margin. We always want to sweep, but to get a win on the road is never an easy task at this level.”

The Yellow Jackets ended up losing the second game with a controversial goal in overtime that seemed to be offsides, but the refs deemed it a good goal.

Captain Joel Kocur had a few things to say about the weekend. “It’s nice to see that some areas of our game are coming together, especially offensively,” Kocur said. “But the standard for this program is to sweep. Every single weekend, that is the goal. And this weekend we fell short, which is upsetting. We took a step in the right direction, but there are still things we need to improve and get better at. We showed a lot of good things this weekend, so we will take the positives and we will learn from the negatives of our game.”

The Jackets take on Army next Tuesday, November 19 at home in Springfield. Come out and watch the Jackets in person.

Chris Dodero is looking forward to the upcoming game against Army. “You know we have already played them twice this year and we split with them,” Dodero said. “They are a good team and we are going to need our best effort from everyone on the team to come away with the win. Last weekend is over, and we’re on to Army.” Come support your Yellow Jackets as they look to make a push before winter break!