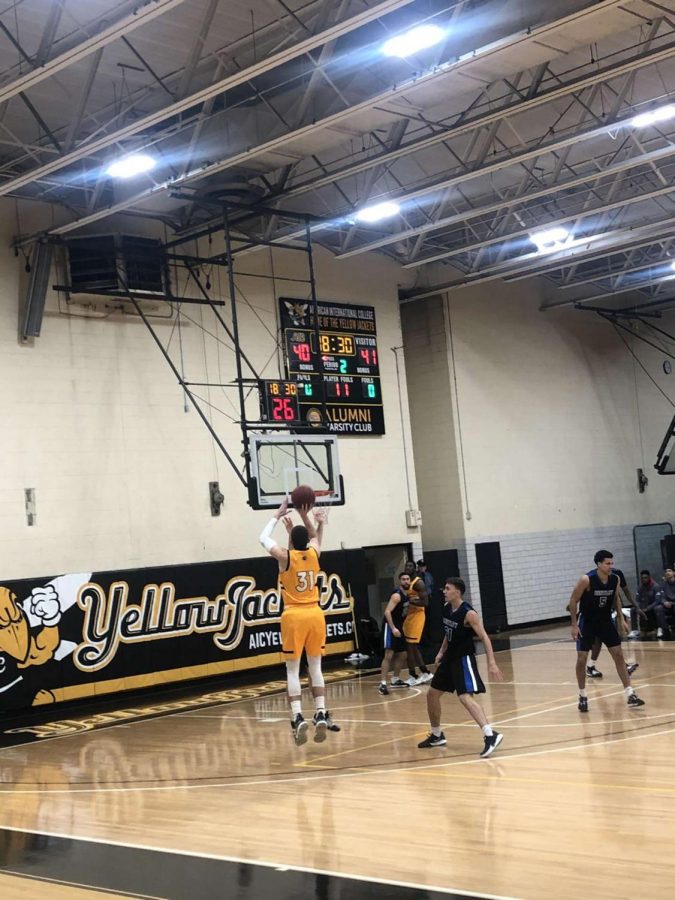 Saturday’s basketball game against Bentley University was close, but ended in defeat for the Yellow Jackets. Bentley beat AIC, 66-73.

The Yellow Jackets fought throughout the entire game, but the Falcons were stronger in the end. It was a very intense game. The two teams were almost constantly tied.

The game did not start off well for either team. It took three minutes before the first points went on the board, with the Falcons quickly taking a 4-0 advantage over AIC.

Senior forward Zekiah Owens netted the first points for the Yellow Jackets. Owens then rapidly became a defensive player and took the ball from his opponent as the Falcons were trying to shoot.

Owens’ steal made another two-point shot possible for the Yellow Jackets. Owens, then in a defensive set, once again, stole the ball from the opponent to give AIC a 13 to 5 lead.

Owens had a great game, scoring 20 points with multiple steals and assists throughout the game.

In the two quarters, the game had multiple lead changes. It was a neck-to-neck game. The effort was there, the team chemistry was there.

The Falcons were in the lead during the closing minutes of the first half. With only a few minutes remaining in the first half, Owens hit a two-point layup. The Yellow Jackets cut the Falcon’s lead game to two points.

The score was 37-35 to the Falcons at the end of the first half.

Bentley came out of the locker room strong. They hit a right-handed layup straight away. Fortunately, Branislav Terzic was there to help turn the tides. He made the long shot possible, allowing AIC to take back the lead, 43 to 41.

The Falcons tied it up, and it stayed even for a while. But the Falcons broke the deadlock with a three-point shot by Brian Wright-Kinsey.

With only five minutes left in the second half, AIC was fighting with all their might to pull out a victory against their rivals. But the Falcons earned free throws at the end of the game, making victory impossible for the Yellow Jackets.

Junior guard Shyheim Hicks said after the game, “I feel like we played hard [throughout] the game on both ends, especially on defense. We just couldn’t capitalize and put the ball in the bucket. And that’s what cost us the game.”

This sentiment was echoed by forward Goree Venable, a transfer senior at AIC. “I think we played well,” Venable said. “I think we could have played defense a little bit better as far as the first half, but we played very well. Everyone did their part…for the scoreboard and in the defensive side, as proved by the turnovers done by Bentley’s offense.”

The Yellow Jackets forced Bentley to turn the ball over on numerous occasions, as Venable said. Bentley turned the ball over 13 times, while AIC only surrendered the ball 7 times. But AIC failed to convert enough of those fast break opportunities into points on the board.

“Team stats proved that they played well—everyone,” Hicks said. “Everyone had a good mindset coming to this game. But missing shots discouraged the team.”

AIC’s player of the game, Branislav Terzic, scored 13 points. Almost all of his shots came from behind the arc. He went 4 for 4 in his 3-point shot attempts, and 1 for 2 from the free-throw line. He also helped in the rebound department, with 5 defensive rebounds.

Bentley not only outscored AIC, they also had more rebounds. The Falcons had 42 rebounds to AIC’s had 32. Those 10 rebounds made a difference.

Venable looked back on the game with mixed feelings. “Sometimes it feels really good,” he said. But he hopes that next time, he will “try to be more mentally focused. I would try to fix some possessions where I was too passive.”

Following their loss to Bentley on January 25, the Yellow Jackets lost to Stonehill, 72-56, on January 28, but defeated Saint Michael’s on February 1, 85-75. They also lost to Adelphi at home on February 5, 95-92. Their next home games will be against Southern Connecticut State on February 8, and against Le Moyne on February 19.