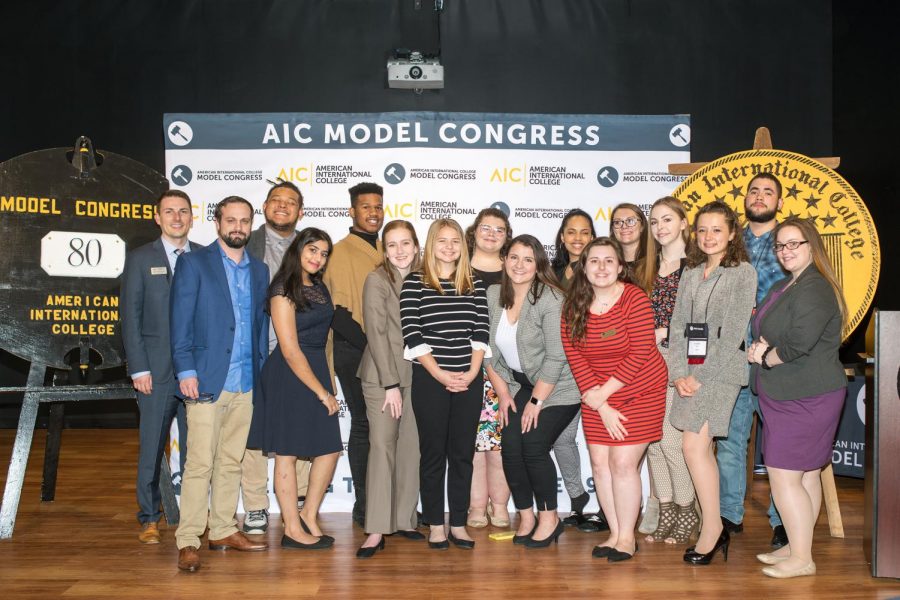 From January 9-11, 2020, high school students gathered at AIC from Massachusetts and surrounding states like Vermont and New York, hoping to debate their way to victory.

These high school delegates prepared bills on topics of concern that are relevant in society today–such as abortion regulation, renewable energy, and vaccinations.

Their goal throughout the weekend was to impress the judges enough to win one of three scholarships to AIC, among several other awards.

Alex Cross, the Associate Dean of Student Life at AIC, participated in Model Congress as a judge this year.

Cross explained his involvement in the program, saying, “This is the first year that I served as a judge for Model Congress. I was asked if I’d be interested in doing it and as a history and political science double major in my undergrad, I was very interested. The fact that it’s the longest running Model Congress program also interested me, and I was happy to be able to help out.”

Judges are provided with a rubric to guide them through their observations and to help them assess the debates.

The rubric outlines that they should focus on qualities like professionalism, knowledge of subjects, the way the speakers interact with their fellow delegates and argue their points, among other aspects of debate.

Cross was impressed with the professionalism displayed by such a young group of people, and with their knowledge about their bill topics.

He commented, “I was really impressed by the progressiveness of one of the bills, which was essentially decriminalizing sex work. There was a lot of conversation about how it’s your body and you should be able to do what you want with it… I found it all very interesting.”

An event like this requires extensive preparation not only on the part of the high school students competing, but also from the members of the AIC community who make it happen.

Although the event consisted of only three days, Dean of Students and advisor of Model Congress Matt Scott and AIC students Hannah Belanger (Operations Chairperson) and Mariah Mauke (Legislative Chairperson) worked tirelessly since the beginning of the fall semester to bring the event to life.

Matt Scott commented on the preparation for the event, saying, “There’s a lot that goes into this program. It’s not just bringing people together and having them debate. You have to have the foundation and logistics, from the name badges and signage, to making sure we have hotel blocks available, to just having water available. There’s just so much that goes into planning this.”

Scott pointed out how Model Congress is unique from other conferences in that it is almost entirely student-run. Other conferences hosted on campus have a lot more support from outside the institution.

“We do the 413 RA conference,” Scott said, “that is staffed by a bunch of professional staff members from multiple campuses that come together to pull it off. Whereas here, you have one staff advisor and then it’s all students that pull it off. So I think there’s a lot of different skills that are built during this process that students don’t even realize.”

He continued, saying, “I think it gives the AIC students an ability to develop and hone not only their debate skills but more of their soft skills–like self-confidence and event management.”

The 80th Model Congress staff consisted of fourteen hard-working AIC students who went above and beyond to ensure that the conference went off without a hitch.

“I think this year was definitely the best in terms of a logistics perspective,” Scott claimed.

“I think we had a good team where anytime something was going wrong, it wasn’t panic, it was, ‘Alright, let’s identify the problem and fix it.’ And it just goes to show that you don’t have to have a massive staff; you just need to have a dedicated staff. And in this case, we had a very dedicated staff.”

Scott focused for a moment on what he thinks the students get out of being a part of the program.

“The untold story of Model Congress,” Scott said, “is the camaraderie and friendships that come out of it. I’ve noticed since the event I’ve been seeing a lot of the people that were on the MoCo staff eating together in the DC and going off and doing things together. There’s something about that experience and just being together all the time I think has an impact. And I hope we get an opportunity to share that with more students.”

Rose McCaffrey, a freshman communications and political science major, was one of the dedicated staff members for the conference.

McCaffrey was also aware of the camaraderie involved in the program. “I have made so many friends through Model Congress,” McCaffrey said. “And even the people I knew before, I feel like I’ve developed deeper relationships with.”

McCaffrey also shared her thoughts on how the student staff was able to run the conference. “It was so organized,” she said. “I’ve been to five Model Congresses at AIC now, and this one was by far run the best.”

Since this year was such a milestone with it being the 80th annual event, Model Congress invited back AIC alumni that had been a part of the conference in the last 80 years to experience it all once again.

Matt Scott was proud to bring participants from different generations together.

“It was just so great to hear their stories and how excited they were to see that the program is still happening,” Scott said.

“They couldn’t believe that we had kind of taken it to the next level. I thought it was really awesome just to see a different perspective and people that have been in our shoes before come back and be really proud of the program that we’re still pulling off eighty years later.”