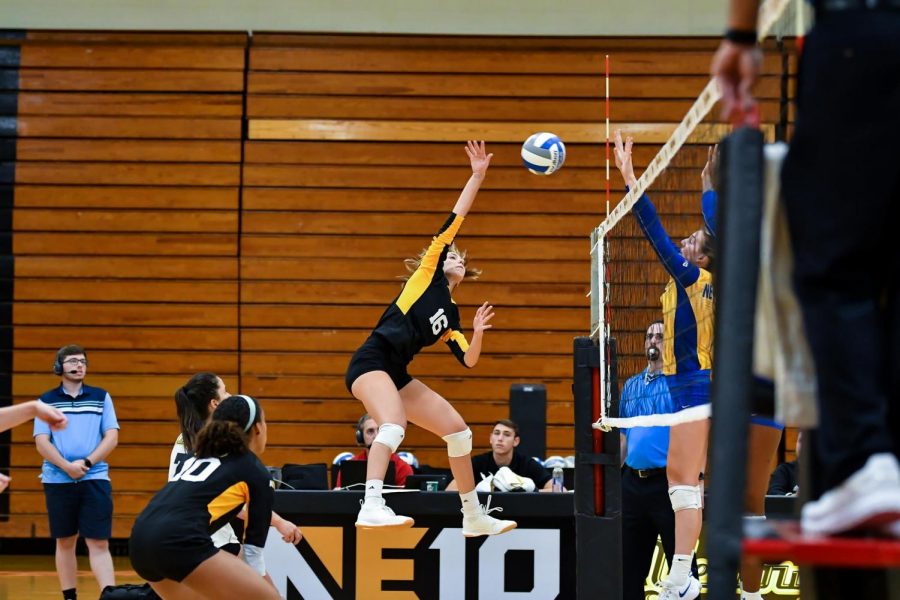 AIC women’s volleyball went 14-17 last season, but had a dominating 10-3 record in the conference. Ten of the 14 wins over the season came on their home court. The Yellow Jackets went all the way to the NE-10 finals, but gave up a two-set lead to lose to their rival, Bentley. In the off-season, the players and coaches reflect on how to best prepare for next season.

A number of the players were recognized for their skills on the court, with Andrea Serra-Rosa, Naomi Eckert-Rivera, and Sarah Lowery all receiving recognition from the American Volleyball Coaches’ Association (AVCA). Serra-Rosa, Eckert-Rivera, and Lowery were joined by Diva Rivas-Reyes and Jana Potic as being named all-conference selections.

If you ask the team, the player who stood out the most this season is Andrea Serra-Rosa, a junior from Puerto Rico. Serra was named the East Region Player of the Year by the AVCA and earned first-team honors from the AVCA, the NCAA Division II Conference Commissioner’s Association (D2CCA), and the Northeast-10 Conference. She was also named NE-10 Player of the Year.

Another player from Puerto Rico, first-year setter Naomi Eckert-Rivera, has made a big impact on the team in a short space of time. Eckert-Rivera was named the AVCA Freshman of the Year. While she was not named to the AVCA First Team, she and Lowery received honorable mentions. Eckert-Rivera was selected for the Conference First Team, and was voted to the All-Rookie team in the conference. Potic earned NE-10 Second-Team honors. Lowney was named to the NE-10 Third-Team.

Despite all of the awards, the loss in the final left a bitter taste in the mouths of the players.

“Last season was a tough one,” Serra-Rosa said. “One of the most important things I learned from last season was never give up when things get tough and to keep working hard every day.”

Eckert-Rivera added that the team is looking ahead, and hoping to finally clinch that final this year. “For next season our goal is, of course, to win the NE10 championship,” she said. “We’ve come so close each year.”

Serra-Rosa added, “My goal for next season is to get better as a team and overcome our weaknesses.” Eckert-Rivera agreed, and she hopes that the team can learn from last year, and start strong, instead of having a rocky first-half of the season.

Serra-Rosa’s dreams don’t stop at just winning the NE-10 though. “The long term goal,” she said, “would be to win the NE10, the East Regional, and to win the first round of the Elite 8, and make history.”

Eckert-Rivera’s own goal is that she can help more around the team. “My personal goal for next season is to be more individualized with my sets. By that, I mean knowing what each player wants and trying to accommodate them, and know who’s hitting on the pins and in the middles, and what I can do to better help them be successful.”

This kind of preparation and attention to detail is what Serra-Rosa thinks will bring the team to the next level. “In practice, we are focusing more on our ball control and our passing as a team,” she said. “Last season, that was one of our weaknesses.”

It’s not just about physicality, however. The mental side of the game is just as important as the physical. Eckert-Rivera felt that this off-season, the team was “preparing more mentally than physically… We have a very dynamic team with great athletes and are loaded with talent. But what brought us down last year was our mental aspects in the attitude on the court during the finals and just throughout the whole season.”

The way that athletes prepare mentally for a competition can be a huge factor throughout the season, as Eckert-Rivera explained. “I think as a team we can learn a lot from last season,” she said. “We took a really long time to gel as a team and to get to know each individual player and how they play. For this upcoming season, I think we can take what we learned from each player and use it to become a stronger team for this upcoming season.”

Working on chemistry is something Serra-Rosa noted as well. “Besides practices, we have a team lift that helps us get fit,” she said. Group exercises allow the team to spend more time together and become more cohesive.

But the athletes still have their individuality. Each gets ready for the game in her own way. Serra-Rosa said, “I like to listen to specific types of music before the game. That helps me focus, and I always say to myself that I need to enjoy and play hard each game.”

As for Eckert-Rivera’s mental preparation, she would rather prepare herself with the team. “I really don’t have any rituals personally,” she said. “But as a team, we do certain handshakes and say certain things before a game that gets us into the right mindset to go out on the court and forget about everything else and just play volleyball for a couple of hours.”