How Did You End Up at AIC?: A Football Player’s Journey 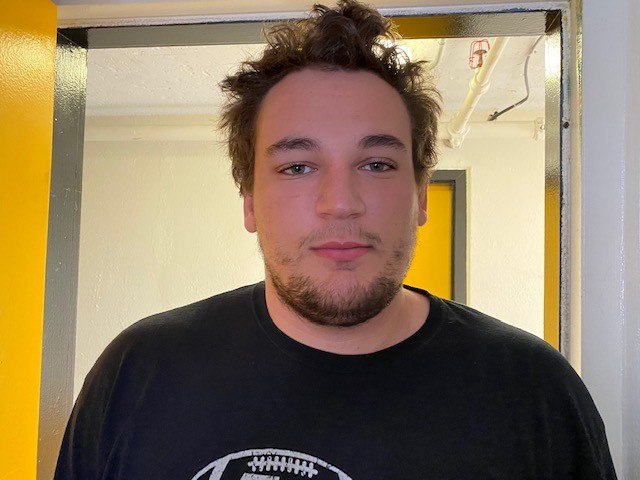 First-year student Ian Williams has had an interesting path to AIC. Williams is one of the fifty-three first-year players on the Yellow Jacket Football team this year, and is also one of the six who play on the offensive line.

“I started playing football in seventh grade at Selbyville Middle School,” Williams said. “I also played basketball and threw the shotput and discus for track.”

As a basketball player, Williams once achieved a defensive triple-double, getting “ten assists, blocks, and rebounds.”

“I also qualified for states for throwing in track,” he said.

Williams’ father played football in high school and played for a semi-pro football team in Baltimore. “He had a passion for it,” Williams said, “so I honestly just kind of picked it up from him.”

“I loved it,” Williams said. “That’s when the emails started coming in from colleges too.” That year also marked his first college football visit. “My first college visit was Fairmont State in West Virginia.”

“After that, I had been on a lot of others that I can’t remember right now,” he said.

“I had one official [offer] to do a post-grad year from St. Thomas More Prep School,” he said.

In the end, Williams decided to do a post-grad year at St. Thomas More Prep School in Connecticut.

“I wasn’t NCAA eligible for Division I football at the time when they were recruiting me, which broke my heart,” Williams confessed. “I would’ve loved to play at a D-I.”

“But,” he added, “I ended up playing at one of the best preps in the country.”

Following his post-grad year at the prep school and earning NCAA eligibility, Williams was again faced with a tough decision of where he would go. Williams’ top schools included fellow NE-10 members, including the University of New Haven and Southern Connecticut State University. He also held a PWO from the University of Delaware, but he ultimately decided on AIC as the best fit for him.

“I picked AIC because I liked it here the best,” Williams said. “It was also the cheapest option for all four years.”

With uncertainty about how the next four years will go for his football career, Williams, a business major, has an idea of what he will do when his college football career is over.

“It all depends on the next four to six years,” he said. “I’ll do something with my business degree–maybe open a restaurant or something like that.”