LBJ Sends Frosty to Vietnam to Melt: A Review of A Holiday Classic 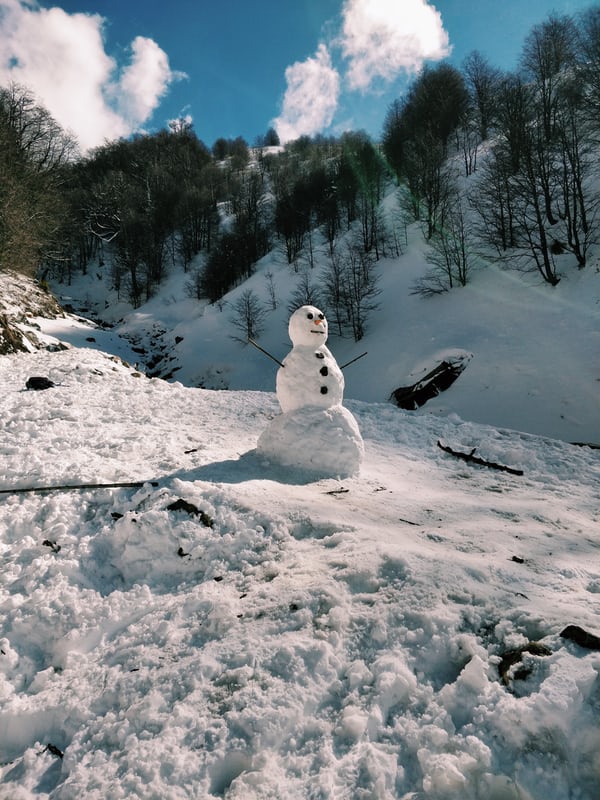 Frosty the Snowman (1969) & Frosty Returns (1992) are two must-watch holiday classics. These specials are for all ages–a captivating, fun watch for kids, and an insightful representation of topics and issues relevant to today (and to the past, for adults). There is more to this than simply a children’s cartoon.

These holiday animated specials contain hidden morals that challenge today’s society to take a closer look at their own effect on the world. Frosty opens with a familiar scene that we can all relate to: children at school, well distracted by the whimsical white flakes floating softly to the ground outside their classroom window. They are only minutes away from the bell that we have all waited for so anxiously.

Professor Hinkle, voice acted by Billy DeWolfe, is the main antagonist of the first part. Hinkle attempts many times to steal back the magic hat that he has thrown in the trash. Due to the character’s selfishness and lack of consideration for others, the audience is compelled to root for Frosty and Karen to outwit him.

In contrast to Hinkle, Karen, who is voiced by June Foray, is unselfish and acts for the good of others. A perfect example of this is when Karen puts her own health at risk and develops a cold in her efforts to get Frosty to the north pole safely. This demonstrates a truly unselfish act to help her dear friend, Frosty.

Frosty, who is the main character, voice acted by Jackie Vernon, is a snowman like no other. He sings and dances with the children. He is a happy ball of snow who embodies the Christmas spirit. Frosty reminds us of childlike wonder that is often forgotten in the commercialism of the holiday season.

The character Holly, voiced by Elisabeth Moss, is introduced in the second part, Frosty Returns. Holly is like Karen, selfless and acting for the good of her friend Frosty. And again, we see the opposite in the antagonist, Mr. Twitchell, a self-centered businessman who only cares for his company’s success.

In the first part, Frosty has to make his way to the north pole due to the increasing temperatures. The whole time, Professor Hinkle is chasing after them in pursuit of Frosty’s hat. On the way, the kids are introduced to obstacles from both nature and from Professor Hinkle. In the second part, Frosty is in danger due to the popularity of “Summer Wheeze.” “Summer Wheeze” is a spray that gets rid of snow. The kids must not only stop use of the spray, but change the townspeople’s negative views towards snow. Most of the town is against snow, so Frosty, Holly, and her best friend Charles must change the public perception of winter to a positive one so that Frosty can be safe.

In the first half of the movie, Frosty and Hocus Pocus, a rabbit, are having a conversation to resolve how they will get Karen back home and Frosty to the north pole. Since Hocus Pocus cannot speak, he acts out what he is trying to communicate. So, Hocus Pocus acts like a soldier, and then like the president. Frosty says no to each charade, saying that they need someone nearby who can help. Hocus Pocus then acts like Santa, and Frosty agrees.

Frosty the Snowman first aired in 1969, during the Vietnam War. Many Americans felt that we should have never gone to war, and since it had been going on for fourteen years when then the special was made, many Americans were becoming fed up that we were still fighting in Vietnam.

The second strong political statement the movie makes is about climate change. The first part makes a simple connection to climate change: when the temperature rises, Frosty begins to melt. That is the reason Frosty, Karen, and Hocus Pocus make the journey north.

However, the second part makes a strong connection to the blindness we as a society have with regard to pollution and to climate change when economic interests are involved. Businessman Mr. Twitchell creates a spray called “Summer Wheeze.” The spray easily removes snow and makes it summer-like, even in the winter. This is similar to what we are seeing begin to happen on a global scale today. “Summer Wheeze” can be compared to greenhouse gases.

When in a meeting, one of Mr. Twitchell’s employees questions the environmental effects of his product. Before the employee can finish what she has to say, Mr. Twitchell’s cat presses the button on the table and suddenly the floor from beneath the employee vanishes, and she disappears. This portrays what has happens in our world when money is the deciding factor, not the right choice. Many big corporations get away with pollution and the production of greenhouse gases, and people’s efforts to change our ways seem not to stick. They simply disappear, as if a latch opened beneath them during a business meeting.

The final political statement Frosty the Snowman and Frosty Returns make is about mob mentality. In both specials, the adults hate the snow, while the kids enjoy it because of the fun and beauty it brings. That soon changes, though. A kid in Holly’s class tells the class that he hates the snow. Another joins in by saying that it should only snow once a year. One by one, students change their minds from loving the snow to hating it. And if this one kid never expressed his feelings towards snow, the whole class would still have their love for snow. Instead of the kids thinking for themselves, they just followed another’s lead.

In summary, Frosty is to be enjoyed by many and has important messages spread throughout. Frosty is more than just a cartoon. As a child, you can enjoy its themes of friendship and holiday cheer. Adults too can see it this way, but with more understanding of issues that have occurred or are still occurring; it encourages viewers to choose a political stance as well. I cannot recommend it enough. Even after all these years, Frosty remains a staple for Christmas movie watchers. Frosty the Snowman and Frosty Returns is undeniably a flawless film.