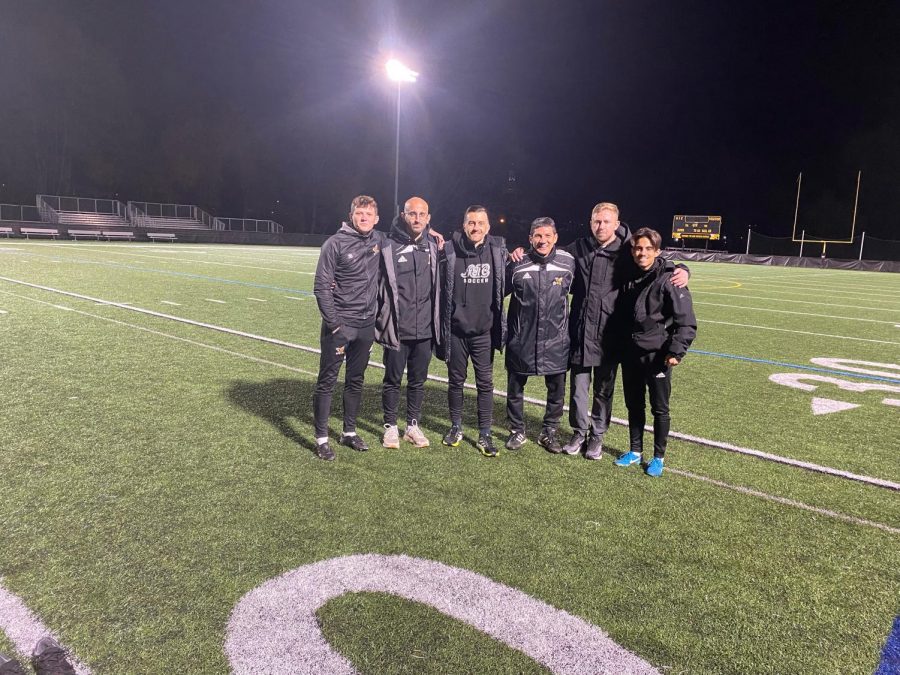 SPRINGFIELD, MA–American International College is known in the surrounding area for having a rich student athlete-to-student ratio, with a vast majority of undergraduate students being student athletes. This year, the men’s soccer team thrives as they break record after record to enter unprecedented program success.

Prior to the start of the Yellow Jackets’ remarkable start of their 74th season, the best season in program history was in 2005 under head coach Fred Balbino, with a season record of 11-6-2. The 2005 season also marked the program’s one and only title: ECAC Division 2 Champions. As the Men’s soccer program continues to steamroll past each team they play, one question circulates in the dressing room: How far can this group of players go in the program’s uncharted success?

The 2005 season was a landmark season. It “created a foundation for the future,” according to former head coach Fred Balbino. The group would go on to make an appearance within the ECAC Championship, a tournament in which American International College would play and eventually host. After winning ECAC, the school’s first trophy in program history, coach Balbino expressed that a feeling of pride developed amongst his players as the four years of hard work prior to their record-breaking season were finally paying off.

Can the 2021 squad win themselves the same pride in the next few months? Well, Coach Balbino explained that the challenges this current team have faced are far from over, with only two regular season games remaining. “The NE-ten conference is the best division-two conference in the nation,” Balbino said. “Saint Rose and Franklin Pierce are two great teams that the team will have to prepare to be consistent and resilient for ninety minutes.” Balbino added that he is confident that coach Perry will have these athletes well prepared for the challenge at hand.

The Yellow Jackets faced the College of Saint Rose on a chilly and wet afternoon on Saturday, October 30. They lost, with a final score of 1-2. The team then packed their bags for a long-awaited match up against the fourth nationally-ranked Franklin Pierce University. With seventeen years of experience within the NE-10, coach Balbino advises this group to “enjoy and embrace every moment and be ready to give your everything when your number gets called.”

The team kicked off their 2021 campaign with a record-breaking start, earning a 6-0-1 record after a wonderful team effort against a resilient Bentley University team. The Yellow Jackets would face their first great challenge of the season against the Le Moyne dolphins, who were disciplined and nationally ranked at nineteenth. The game would go scoreless for 96 minutes before Austrian freshmen, Niklas Stalzer, would tap home the game-winner off a defensive error in the first period of overtime.

The success this team was seeing came as no surprise to coach Perry and his coaching staff: “We could see this team was special as early as preseason,” said Perry. “The results we pulled away from division-one teams–it was only a matter of time before it all came together.”

The team would only continue to climb the expectations of not only others but themselves. Graduate student and co-captain, David Harper explained that one of the greatest challenges this team has faced on the pitch this year has been “knowing how good of a team we really are and holding that confidence.”

The group earned national attention after being ranked twenty-third in the country for the first time in program history. Several weeks later they would grind to climb to fourteenth in the country before closing their season with a national ranking of twenty-third.

What makes this team different? Why this team?

Jake Durham, the men’s soccer assistant coach and four-year star former player, said that this team is not vastly different from the teams we have had in the past. “The culture of the team is a lot more positive, and we have a lot of players working towards the same goal,” Durham said. “In the past, we have had the same talent, but we weren’t coming together as a squad.”

Captain David Harper added that “the professionalism of this team makes this team… We need to handle things well both on and off the field.” Overall, the team has had to learn how to handle not just being a good team, but a great team. The most challenging part has been maintaining that form.

The coaching staff hoped for these athletes to “play the game and not the occasion,” and they certainly did.

Former head coach Fred Balbino, with nearly two decades of coaching at the collegiate level, has held many teams’ seasons on the line at the back end of a season. He leaves this group with one last piece of advice: “Enjoy and embrace every moment; be consistent, and be prepared to grind it out for ninety minutes. When your number is called, be ready to give your all out there.”