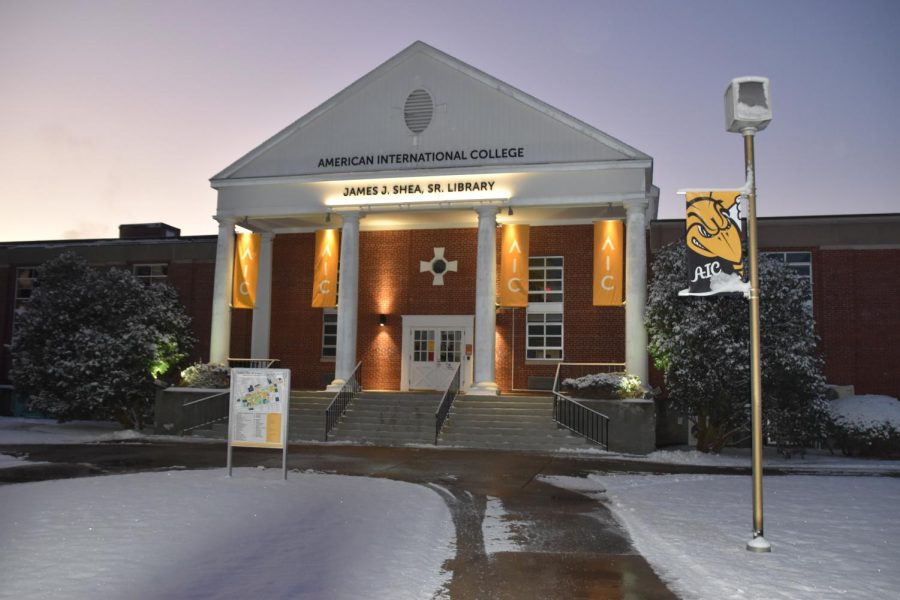 The Shea Library at dawn after snowfall.

On the morning of Friday, January 28, 2022, students at AIC woke up to a fright. Not only was everything white and freezing, but low and behold there was snow on the ground. It came as a light dusting at first. Everyone was thinking, “This won’t stick!”

I work at an overnight take-care job through a company called BFAIR. Driving to the houses is very hard, especially in these conditions. I usually have a thirty-minute drive out to Westfield. But again, in these conditions, it’ll be more like thirty minutes to an hour. Not to mention I also drive a 2010 Hyundai Elantra. Don’t get me wrong, I love my girl Judy (that’s my car’s name) but she wasn’t built for this type of weather!

To everyone’s surprise, it fell for about twelve hours straight–covering cars and houses with wintery snowflakes.

Working overnight is hard because I either go to work and risk getting stuck in the snow, or else I’m forced to call out. I ended up having to call out because the snow was super slippery and I have a low car, so she would just be slipping and sliding everywhere.

When preparing to make the phone call to my boss I looked out the window and the snow plows were coming. I was ecstatic when I saw them. I thought maybe, just maybe I’d be able to go to work. This took a huge turn of events because my poor car was parked on the street and she got trapped in the snow as the plows passed by.

Talking to some of my peers on campus and getting their opinions on the storm, they were just as surprised as I was with all the snow we were getting. By because I’m staying off campus, I only really get to hang with my friends when I drive to campus. From the looks of it, that wasn’t going to happen at all.

Long story short, I had to spend the rest of my evening trying to get my car out of the snow. It was such a hassle. After all the hard work of shoveling did with my family, my mom asked us all if we wanted to just watch movies and relax for the rest of the day. We did just that; we all decided to snuggle up on the couch and enjoy hot chocolate and a scary movie. My dad decided to pick a movie called, The Final Paranormal. It was really good actually; it scared us all a couple of times. We all were jumping, screaming, and laughing, enjoying our horror film. I mean come on, who doesn’t love a good scary movie now and again?

Snow days are crazy days, but we all love a good snow storm and the chance to call out of work, don’t we?