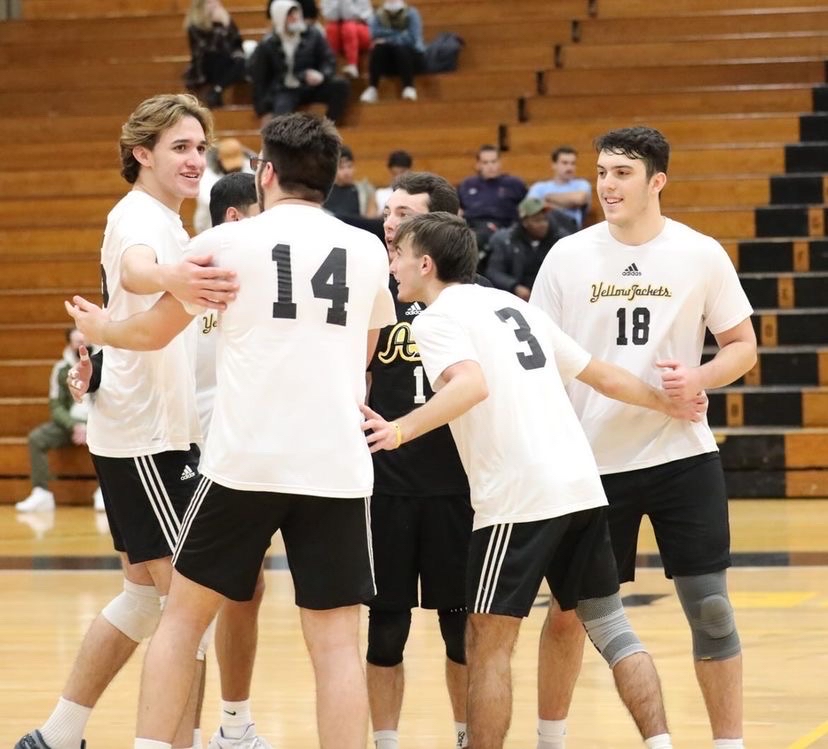 The men's volleyball team celebrates their win against the Sage Colleges on February 5.

Don’t be misinformed though. This is a young and inexperienced team, but they show fight. In their losses, the average margin is 8 points. Being that you need 25 points to win a set, it usually leaves the Yellow Jackets at 17 points a set. If you’ve ever watched a volleyball game and understood it, you would know that’s not too bad. In volleyball, experience and chemistry with your team really is important, and it shows on the court if you don’t have that. If the other team does have those qualities, they are usually able to expose it. With that being said, that’s truly not bad for a new team figuring out everything for the first time. In their first win of the season, the Yellow Jackets were able to almost flip that stat around, winning three straight sets in an average of a 6-point margin, which shows signs of growth.

With this being a new team, I wonder about some of the struggles Coach Reyes went through to get this team started. He explained that his biggest challenge had to be recruiting players. “It’s hard to convince a player on what the program could be when it didn’t yet exist,” Reyes said. How do you get players to commit to a program and to believe in a first-time team? He added, “I was just focused on my philosophy as a coach, and my experience from professional clubs, and international play, and how much they would learn as players.”

When you look at what Coach Reyes said, and look at the roster he put together, everything matches up. He really took the time to recruit this team, seeking talent from across the world. Three players–Pedro Panelli, Wilmer Rodriguez, and John Ortiz–are from Puerto Rico. Michele Bascape is from Italy. Three players–Manik Marins, Ben Warren, and Alex Marinaro–are from right here in Massachusetts. Brendan Hickey hails from New York, and Tashir Ballard from New Jersey.

Coach Reyes has only had a short amount of time with his team thus far, but I was interested in knowing some of the things he may have learned from the coaching aspect up to this point. He expressed how fun it is to be working with a group of players who are willing to be better. “At the first meeting in September, I said we don’t know how many matches we will win, but let’s go play great volleyball. And they’re doing such a great job. I am so proud of this team.”

Reyes sounds like a coach that anyone would want to play for, especially when just getting started, and I hope the team continues to grow and to be successful. With it being the team’s first season, they need all the support they can get!

The next home game is February 15 at 7pm against Sacred Heart. Come out and support the team! Go Yellow Jackets!