Senior Spotlight: Avery Foye Out With Injury for 2022 Lacrosse Season 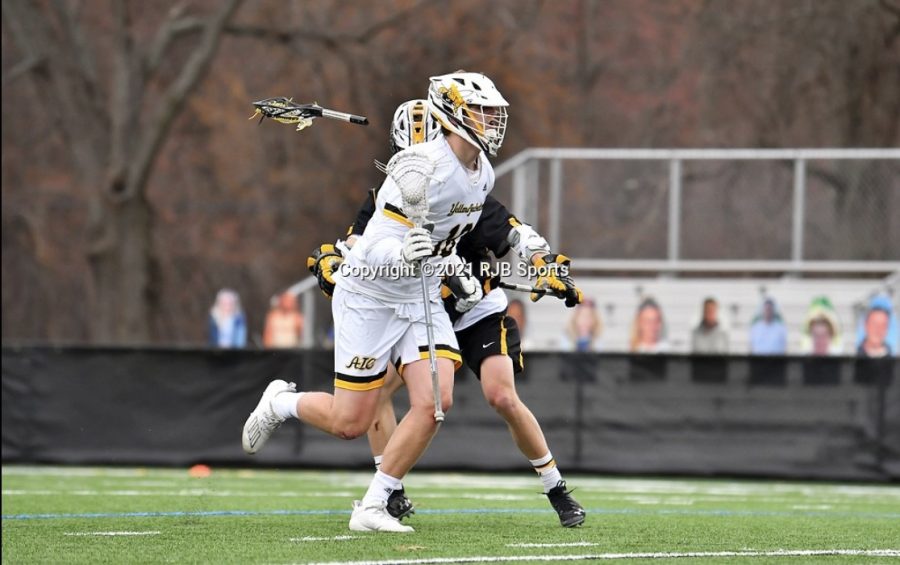 #16 Avery Foye carries the ball down against Adelphi.

Avery Foye was sidelined during his senior year with a season-ending ACL tear for the American International College men’s lacrosse team.

Prior to his injury, Foye had been a three-year starter and contributor, tallying 52 points and 36 ground balls. His career high was a seven-point show out in a loss to Umass Boston in 2021. Foye netted 5 goals and had 2 assists in an 11-23 loss.  Foye was also named to the All-Rookie team in 2019 and appeared on the NE-10 Academic Honor Roll twice.

Foye tore his ACL in the fall. He shared in an interview, “During the fall of my senior year, I tore my ACL in the fourth quarter against Bridgton Academy, a prep school team that sends most of their team to respected Division I and II lacrosse teams.” He explained, “I was carrying the ball up the wing, and as I planted my foot to inside roll towards the net, I tore my ACL and meniscus.  I had scored the possession before doing the same move.”

Foye described his style of play before the injury as being “very offensive-oriented to score goals.  I am not a ‘flashy’ player,” he added, “but I have a very good off-hand that allows me to make good reads or take a shot that someone else might not be able to.”

His coach Tim Robbins agrees with Foye, as he stated in an interview. “Since Avery was a freshman he has been our main facilitator,” Robbins said. “In a certain sense, Avery was our Tom Brady… He can shoot off the dodge from X with both hands and has good vision, a threat in the transition game, and really stretched the field in man-up situations.  Avery has the ability to dodge from anywhere we have used him up top from high corners, from wings, low corners and X, and we used him quite a bit in two-man game situations.  His handwork, size, and strength [make] him a force to be reckoned with.  His ability to shoot on the run or with time and room makes him a very dynamic player and hard to game-plan for.”

Not only does Foye’s coach agree, but so does one of his captains, Sal Amaral.  Foye is the “best shooter on the team,” according to Amaral, “especially with both hands.” Amaral added that Foye is also “probably our best creator. He draws the attention of the whole defense when the ball is in his stick. He’s our best player. He was the guy who we would give the ball to when we needed something to happen, so not having him forced everyone else to have to step up.”

Standing at 6’1” Foye has made a lot of memories on the lacrosse field. His favorite was back in 2020, during his sophomore season, “…when we beat Post University. We had lost the year before and beat them 12-8 at their home field.  Rusty Stone and I both had hat tricks, and our All-Conference defensemen, Eddie Beattie, had to play goalie and finished with twenety-four saves.”

Foye was missed by his coach this season in more ways than one. “We missed his leadership and experience most of all,” Robbins stated. “His chemistry with Rusty Stone and Jason Vickery was also missed – since the three of them have been starting at attack together since they stepped on campus.  One of the best parts about Avery’s game is he can create on any team’s number-one defender.  We had a few guys fill in for Avery’s spot and they did well, but those guys would have been able to draw a lot more mismatches in other spots in the offense.”

Robbins also explained that Foye was not the only player missing from this season with injuries. “Our depth definitely took a hit with this year’s injuries,” Robbins explained. “We also played the majority of the season without our best shooter in the midfield, Cam Menard, our best LSM/defender, Rowan Ruggiero, who was a big threat in between the lines, and three other starting defenseman have been sidelined with injuries throughout the season: Nick Mackay, Gabe Zippin, and Mase Papirio.  On a positive note, we were more competitive than in the past, even with all these injuries, and we had a lot of freshmen earn valuable experience.”

Despite some of the injuries, the Yellow Jackets had a win over St. Thomas Aquinas College to start their season off. Foye explained, “The team high this season was winning our home opener against Saint Thomas Aquinas College, 7-4.  It was a great game, and a great way to kick off the season.  It was also the first men’s lacrosse win on Abdow Field in a long time.”

Foye, a marketing major, has been playing lacrosse for fifteen years and chose AIC because he wanted “the chance to compete in the NE-10, and because of the scholarship opportunity that was presented to me. My father played football at AIC as well, and he had nothing but good things to say about the school.”

Foye describes his team as “… some of the hardest working and resilient group of guys. We play in the toughest conference, and battle through a lot of adversity. We do a great job at being positive and being good teammates.”

Foye also reflected on his favorite memory with the team. “I always like the beginning of the school year when the whole team gets together after the summer and we get to meet all the new freshmen.”

Foye is coming back next season with another year of eligibility, and his coach is excited. “I am extremely excited for Avery to be back,” Robbins said. “He will be a fantastic facilitator and leader on the field.  We also have some fantastic recruits coming in at all positions, but most excited to have a few lefties coming in that have the ability to put the biscuit in the basket.  With the injured guys returning and the incoming freshman, we will have over forty guys for the first time in AIC Lacrosse history and the most depth and talent from top to bottom.”

Foye explains his time as AIC as “a great experience with a great group of people.  There is more to life than just college sports, and I have got a great education and made some of my closest friends.” What he will miss the most after next season is “being able to play my favorite sport with my teammates and friends, and all the good memories I had in college.”